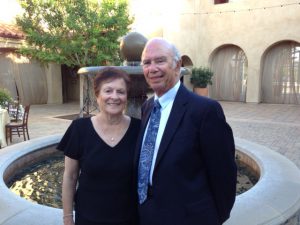 Vic & Marie met in Pennsylvania. While living in PA, they had their first two children, Vic, Jr. and Richard. Due to several job transfers, they moved to North Carolina where their third son, Michael was born. They then moved to Bowie, MD and then Madison, CT where they had their daughter Nancy. In 1978 Vic was offered a job with Saab in California and off the family went again. They have resided here ever since.

Marie grew up in Oakmont, PA where she once worked at the famed Oakmont Country Club. She really enjoys spending time with her grandchildren and working in her garden.

Vic grew up in Wilkinsburg, PA and was a musician in his early years having played with several Rock and Roll Hall of Famers. Once his musical career was over, he started working for vehicle manufacturers and so started his numerous relocations around the country. Vic (or Pap Pap as they call him) enjoys hugging his grandchildren as hard as he can. He and Marie enjoy attending the baseball games of the grandchildren. They also host dinner every Sunday for the entire family. It’s a noisy house and everyone enjoys the family time spent.

When ARP started in 1990, Vic decided the company’s focus would be on the corporate sector of the business. His goal was not to be the largest vehicle relocation company; he simply wanted to provide the best service. With the help and hard work of his children, Vic has been able to retire from the daily grind in the office. His goal now is to travel as much as possible with Marie. They both deserve it!